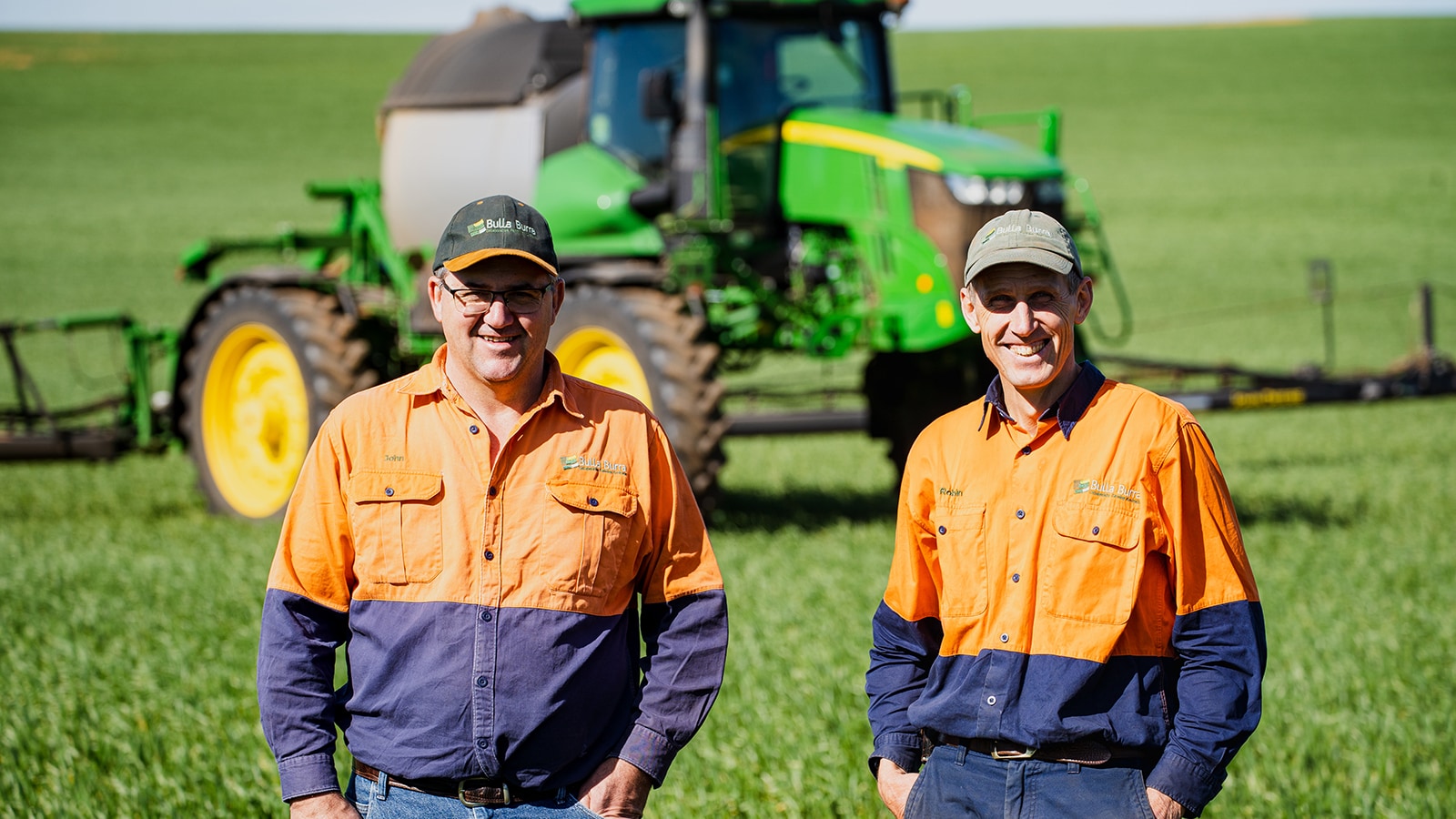 Crestmead, Queensland (26 August, 2020) – WITH the soul of a family business, and the mindset of a large-scale enterprise, Bulla Burra Farms exemplifies what can be achieved when collaboration meets a desire to use the world's best on-farm technology.

Sprawled across 10,000 ha of red, sandy soils outside of Loxton, South Australia, approximately 45% of Bulla Burra's operations are dedicated to wheat growing, with the balance made up of barley, legumes and oats for hay production. The business has battled a run of dismally dry conditions since 2017, with both the 2018 and 2019 seasons carrying the grim titles of being within the fourth lowest rainfall years in recorded memory – only 90mm was logged last year.

"If you go by some of the production matrices on water usage efficiency, for 90mm of growing season rainfall you should actually be able to grow nothing, because the evaporation factor is higher than the rainfall we got," John said.

Unlike in earlier times, their dedication to no-till farming meant they witnessed the miracle of producing a crop which should have yielded zilch.

"But, last year, we were growing zero point six to zero point eight (0.6 - 0.8) of a tonne to the hectare, we even had crops going one point four tonne (1.4) to the hectare for a few paddocks. Given that, I believe we have done remarkably well from a sustainable farming perspective."

"We did still make significant losses in those years as no-till farming systems can have high input costs and overheads. However, we managed to grow some crop, maintain groundcover and not degrade our topsoil as had been the case in previous droughts, which has been a far better environmental outcome."

The strength of the Bulla Burra success story extends beyond savvy on-farm management and the adoption of precision agriculture, and to a unique ownership model. Eleven years ago, John and Robin merged their individual businesses to create Bulla Burra Farms, to capitalise on economies of scale, while retaining the integrity and beating heart of a family farm.

In doing so, they threw the rule about never mixing business and friendship out the window, given they have been mates since they were teenagers, and their wives are best friends.

At the time of the merger, each were running successful operations of around 2000 ha each in their own right, to be in line with the average size of a family farm in the Murray Mallee region of SA. But, the decision to join forces has paid dividends over and over again.

John is Bulla Burra's executive director, and has brought his business expertise and collaborative farming knowledge to the operation, while Robin, the general manager, was an early pioneer of no-till farming in South Australia, and injected a dedication to pursuing the latest in precision agriculture.

An independent chairman was also brought in to oversee their board and to ensure more robust decision-making, while investment was made in new state-of-the-art John Deere machinery and technology to enhance on-farm production and efficiency.

From a production perspective, John and Robin rely on the John Deere Operations Center, a platform which collects real-time paddock data via JDLink™ (available on John Deere tractors for over a decade) from Bulla Burra's fleet of equipment. This simply and efficiently tracks key production elements such as yield and inputs, before processing that information to determine how much is being spent per hectare, to drive business profitability.

The Bulla Burra John Deere lineup is based on three S670 Combines and two 8335RT tractors as the work horses of the operation which rarely have downtime throughout the year. These machines are complemented by R4045 and 4940 Self-Propelled Sprayers and two 1870 Air Hoe Drill Air Seeders, as well as 1910 Tow-Behind and 1910 Tow-Between Air Commodity Carts. Also on the books are John Deere 8300, 6800 and 5420 tractors, as well as an L110 John Deere mower.

"Our main tractors, the seeders, the sprayers and the harvesters are all linked through the Operations Center," Robin said.

"Wherever I go I have information at my fingertips to know what the machinery has done, as well as paddock information from across all of Bulla Burra. For example, the other day when I was crop scouting, I noticed a strip in the field and pulled the seeding maps up on my phone, and I could see straight away it was where I applied a zero-nitrogen strip."

Robin's interest in precision agriculture was borne from his farm's soil variability – within the space of 20 metres the rooting depth can shift from 20 cm to 2 m before hitting a subsoil constraint like rock, limestone or transient salinity.

"Precision agriculture for us is about improving our bottom line. In one paddock we can have a shift in yield from half a tonne, to up to four tonnes to the hectare," Robin said.

"With the data we have on hand, we can allocate our resources to the highest yielding areas and save costs on the spots where more fertiliser won't make a difference. It allows us to get more bang for our buck."

John Deere ExactApply™ on the sprayers has created precise droplet sections to target weeds, reduce the chances of herbicide drift, and decrease the risk of herbicide resistance.

"It individually turns on and off nozzles along the boom, and also compensates for when the machinery is turning to reduce the damage you can cause to your crop through over application," Robin said.

Having the full lineup of machinery running within the same operating system also streamlines the training of new staff members, and means Bulla Burra can keep track of its team of four full-time staff, and up to eight part-time workers at key points in the season, who can be dispersed across a geographic area of 40km north to south and 25km east to west.

John said this is particularly important during harvest and seeding, when the crew works on shifts across 24 hours of the day, as he can access an instant snapshot of overnight productivity.

"A couple of years ago, when we had really big, thick crops and high stubble loads, in the morning I could see the seeders had been turning around 15 times every run. This meant I knew how bad their night had been without asking the question, and could see there had been issues with dew," John said.

"It allows me to keep track of where everything is at, without having to leave the office."

The John Deere Operations Center has also allowed Bulla Burra to focus on what they do best – innovate.

Robin, who has a penchant for agronomy, said it has strengthened Bulla Burra's on-farm trials as all data is instantly captured and nothing goes untracked.

"We were doing some deep ripping for subsoil amelioration, and one of our employees who was working on it suggested if he moved down gears in the tractor his wheel slip dropped, but he could still cover similar terrain, and he suspected it would mean he would use less fuel. He was right. We quantified this from our fuel map, and you could see the difference," Robin said.

The worker's hunch equated to a $5 per hectare saving in fuel costs.

The success of John and Robin merging their business has become, inadvertently, an emblem for collaborative farming in Australia. John has travelled the world speaking about the Bulla Burra experience, and is often in talks with agriculture representatives, and even government officials, interested in learning how they can support joint-farm models.

The highs, lows, and day-to-day of Bulla Burra Farms are recorded on their Facebook page, which reaches 30,000 followers and creates news headlines or viral posts shared thousands of times.

"We want to be part of the conversation that's happening around agriculture. We know a lot of our followers are not involved in farming at all, so we take it very seriously. We try not to be too opinionated but aim to share a topic and let others respond," John said.

"And it's fun, we like doing it, it's allowed people to ride the journey with us."