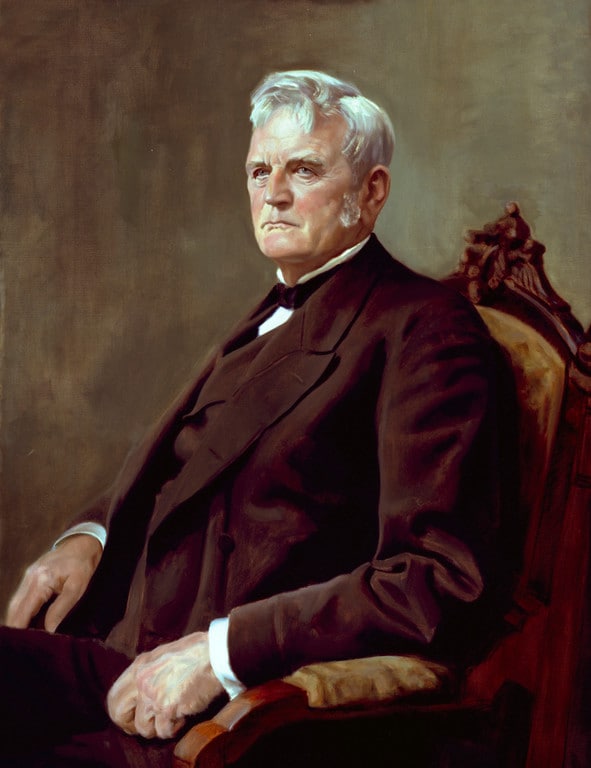 The story of John Deere, who developed the first commercially successful, self-scouring steel plow, closely parallels the settlement and development of the midwestern United States.

Deere was born in Rutland, Vermont, on February 7, 1804, the third son of William Rinold Deere and Sarah Yates Deere. In 1805, the family moved to Middlebury, Vermont, where William engaged in merchant tailoring. In 1808, he boarded a boat for England, in the hopes of claiming an inheritance and making a more comfortable life for his family. He was never heard from again, and is presumed to have died at sea.

Raised by a mother on a meagre income, John Deere's education was probably rudimentary and limited to the common schools of Vermont. At the age of 17, he apprenticed himself and learned the trade of blacksmithing, which he carried on at various places in Vermont.

In 1836, facing depressed business conditions in Vermont and with a young family to care for, Deere traveled alone to Grand Detour, Illinois, to make a fresh start. Resourceful and hard working, his skills as a blacksmith were immediately in demand.

The new pioneer farmers struggled to turn heavy, sticky prairie soil with cast iron plows designed for the light, sandy soil of New England. John Deere was convinced that a plow that was highly polished and properly shaped could scour itself as it cut furrows. In 1837, he created such a plow, using a broken saw blade.

By 1841, Deere was producing 100 of the plows annually. In 1843, he entered a partnership with Leonard Andrus to produce more plows to meet increasing demand.

By 1848, Deere dissolved his partnership with Andrus and moved the business to Moline, Illinois, which offered advantages of water power, coal and cheaper transportation than to be found in Grand Detour. In 1850, approximately 1600 plows were made, and the company was soon producing other tools to complement its steel plow.

In 1858, Deere transferred leadership of the company to his son, Charles, who served as its vice president. John Deere retained the title of president of the company, but now turned his attention to civic and political activities.

John Deere was active in public life throughout his career in Moline. Among other roles, he was a founder and president of the National Bank of Moline, was an active member of the First Congregational Church, and served as the city's mayor for two years.

Deere & Company (NYSE: DE) is a world leader in providing advanced products and services and is committed to the success of customers whose work is linked to the land—those who cultivate, harvest, transform, enrich, and build upon the land to meet the world’s dramatically increasing need for food, fuel, shelter, and infrastructure. Since 1837, John Deere has delivered innovative products of superior quality built on a tradition of integrity. For more information, visit John Deere at its worldwide website at www.JohnDeere.com.au.