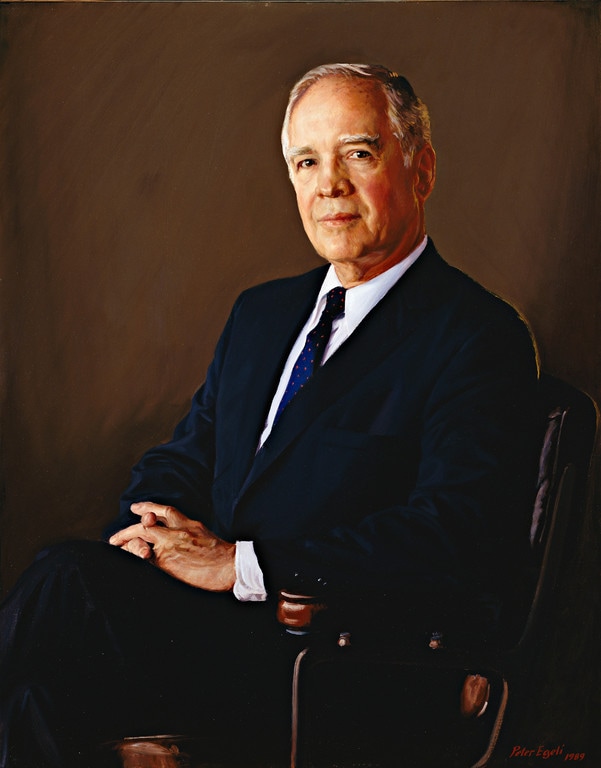 Robert Hanson's distinguished career with Deere & Company spans over forty years. A native of East Moline, Illinois, and a graduate of Augustana College in nearby Rock Island, Illinois, he grew up in a community rich with John Deere tradition.

Hanson began his term as chairman at a low point in the agricultural machinery cycle. Severe recessions in the early 1980s followed a period of high inflation during the late 1970s, and reduced sales of agricultural and construction equipment.

Under Hanson's guidance, the company looked inward to reduce costs. By 1988, the company had weathered the economic challenges of the past six years and sales soared. Annual profit for the year exceeded $315 million.

Even during the downturn in the economy, Deere & Company continued to expand and diversify. In 1985, the company entered the health care market with the formation of John Deere Health Care, Inc. Three years later, John Deere formed a joint venture to assemble excavators in the United States, and in 1989, the company acquired Funk Manufacturing, a maker of powertrain components.

Robert Hanson retired in 1990 after successfully guiding the company through one of its most difficult periods. He died in 2016 at the age of 91.

Deere & Company (NYSE: DE) is a world leader in providing advanced products and services and is committed to the success of customers whose work is linked to the land – those who cultivate, harvest, transform, enrich, and build upon the land to meet the world's dramatically increasing need for food, fuel, shelter, and infrastructure. Since 1837, John Deere has delivered innovative products of superior quality, built on a tradition of integrity. For more information, visit John Deere at its worldwide website at www.JohnDeere.com.