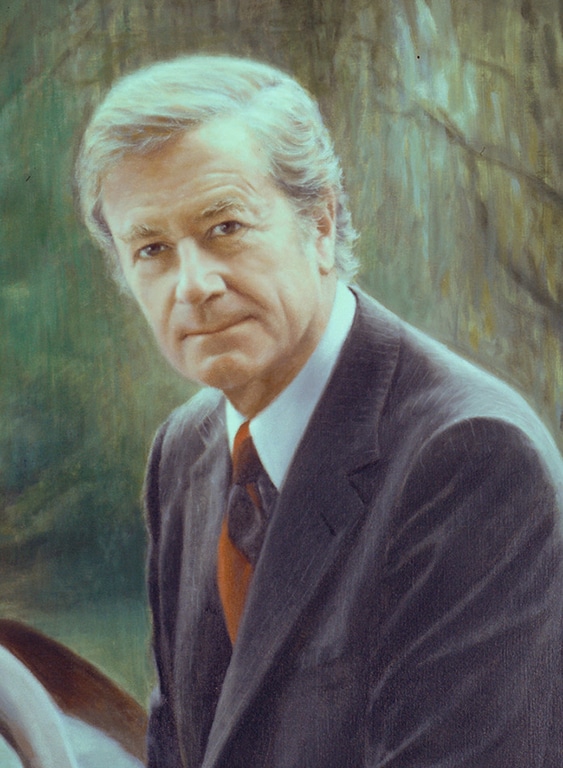 John Deere's sixth president, William Hewitt, was the last Deere family member to lead the company. Born in California, Hewitt received a degree in economics from the University of California at Berkeley. He attended Harvard Business School for a year but lacked the funds to complete a graduate degree.

After serving in the Navy for four years, Hewitt joined the Pacific Tractor & Implement Company. In 1948, shortly after his marriage to Patricia Wiman, Charles Deere Wiman's daughter, he rather reluctantly joined Deere & Company as a territory manager in California.

Hewitt quickly gained a reputation as a good leader and quick learner, displaying coolness under pressure. He was named a director in 1950, and in 1955 was unanimously elected to the newly created post of executive vice president. Twelve days after his father-in-law's death in May 1955, Hewitt was elected Deere & Company's president.

During Hewitt's tenure, John Deere took its first steps toward becoming a multinational corporation. In 1956, the company purchased a majority share of the Lanz tractor factory in Mannheim, Germany, and obtained land in Monterrey, Mexico, for a new tractor facility.

The company continued its expansion around the world for the next two decades. By the 1970s, Deere & Company had a presence in Argentina, Venezuela, France, Spain, Great Britain and Western Europe, Australia, Japan, South Africa, China, and the Middle East.

Hewitt managed the process of bringing the new four- and six-cylinder tractors into the Deere line. Seven years of development culminated in a spectacular introduction of the models – called the "New Generation of Power" – at a noteworthy dealer show in Dallas in 1960.

Hewitt also spearheaded the construction of a new corporate headquarters for the company. After deciding that the company's centre of operations should remain in Moline, Illinois, Hewitt selected renowned Finnish architect Eero Saarinen to design the building. The striking new Deere Administrative Center opened in 1964, and has been cited as one of the world's best architectural designs.

Deere & Company (NYSE: DE) is a world leader in providing advanced products and services and is committed to the success of customers whose work is linked to the land—those who cultivate, harvest, transform, enrich, and build upon the land to meet the world’s dramatically increasing need for food, fuel, shelter, and infrastructure. Since 1837, John Deere has delivered innovative products of superior quality built on a tradition of integrity. For more information, visit John Deere at its worldwide website at www.JohnDeere.com.au.