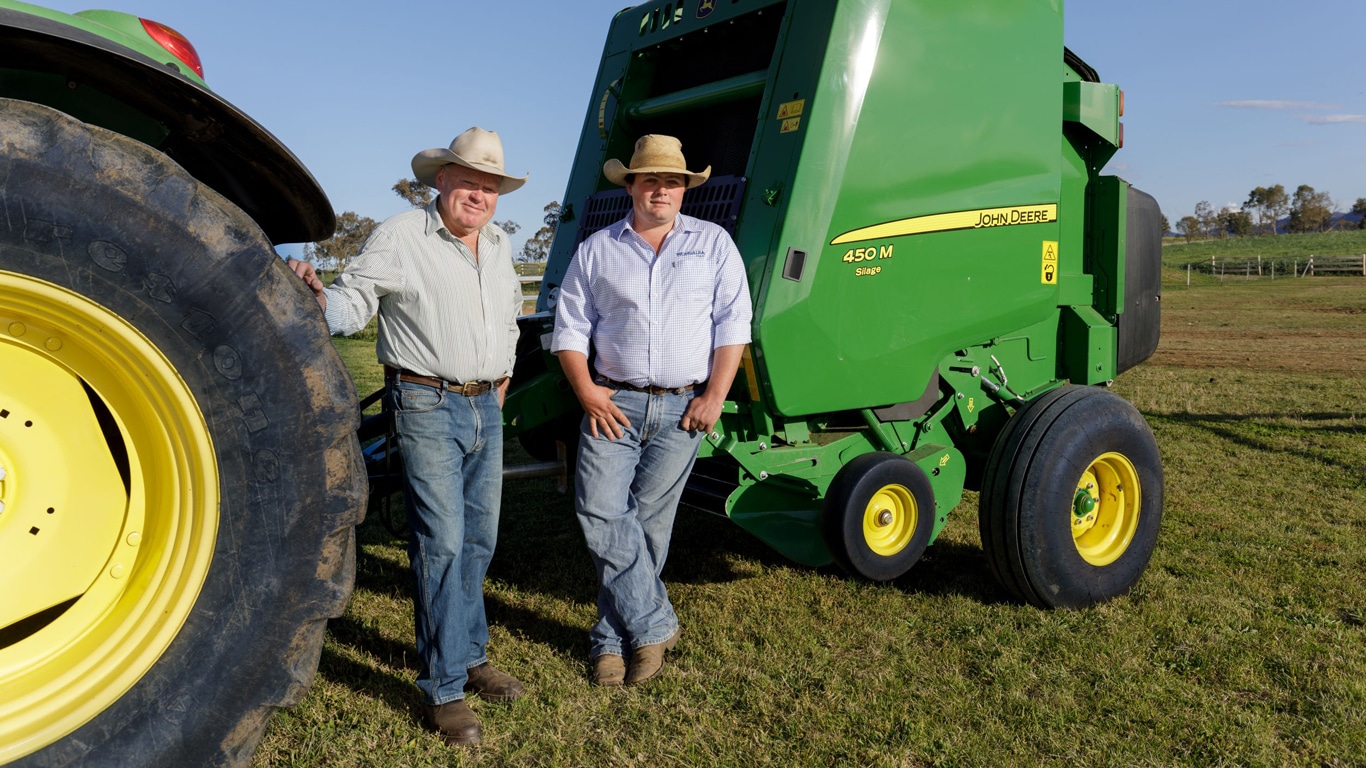 David Ware, and his son, Lachlan, operate four growing businesses on ‘Wungum’, 25km south of Tamworth, and rely on John Deere for their hay production.

Queensland, Crestmead (7 October, 2021) — STRIVING to be as productive as possible is the ethos driving the way for the Ware family, which operates four growing businesses on 'Wungum', 25km south of Tamworth, and is their most important consideration when selecting machinery for hay production.

The cattle and horse businesses require a constant supply of hay and fodder, which 22-year-old Lachlan oversees, cutting lucerne, oaten and wheat hay using a John Deere 7030 Mower Conditioner and a new 450M Round Baler.

The machinery is the ideal fit for Wungum’s needs, and has also paved the way for Lachlan to develop a contracting arm of the business servicing a few local farmers in the region, meaning year-on-year he is cutting more than 400 ha of hay.

"When contracting, we need to be moving across the paddock as efficiently as possible and with our 450M I can produce about a bale a minute," Lachlan said.

"I was impressed with that, and I was able to achieve that rate from the very first time I used it after we bought it last year. I think it’s incredible how much hay you can put through the machine."

As for the mower, Lachlan said durability was crucial given he covers a variety of soil and land types.

"I have operated it in some rough country, and over rocky ground, but it proved it can handle it," he said.

"I have worked with other machines, but I feel the cutterbar on the 7030 is exceptional and better than anything else on the market."

The Wares connection to Wungum has an interesting history given David spent his childhood growing up on the property before it was sold by his parents in the nineties.

In June 2000, alongside wife Mandy, they bought an adjoining block, then three years later they managed to buy the home block back and join both properties into what is now known as Wungum.

"Since then, we have undergone a huge transformation," David said.

Starting with that blank canvass, the family created a masterpiece of production, and used regenerative farming methods, including planting more than 16,000 trees to increase the biodiversity and health of their soils and constructing multiple paddocks, laneways and other infrastructure to accommodate the horse training and stud side of the business.

Throughout this development, the family relied upon a John Deere fleet which today encompasses an 855D Gator, 5065D, 5101E, 6520SE and an older 4440 (which David said is in showroom condition) to expand and evolve the business.

David said they turned to John Deere because they were looking for dependability from their machinery and thorough back-up support.

"The reliability and support from our John Deere dealership have been second to none," he said.

"When our baler was just new, we had to make a minor adjustment in the middle of the night, it would have been about 11pm, so I texted our dealership thinking I would get a response in the morning.

"But, after about two minutes, he had rung me and walked me through exactly what we needed to do and we were up and running again."

For Lachlan, who is a fitter machinist by trade, the availability of parts was also paramount.

"When you are making hay, you don't want to be sitting in the corner of the paddock waiting on something to arrive," he said.

"Recently, a rock flew up and smashed the back windscreen out of the tractor when I was working at night, and by the next day, they had fitted me out with a new one. That is a really big thing for me, I can't spend all day waiting for something, because when it comes to hay you are aiming to capitalise on small windows of opportunity."

Wungum is currently enjoying the fruits of what David describes as an "absolutely phenomenal" season.

David said the three previous seasons were among the toughest years they had experienced, and the business was again in a rebuilding phase, working to grow the commercial and stud cattle herd and improve the health of the land.

"The biggest challenge we face here is trying to maximise the productivity at a minimum cost. We are running four businesses out of this one little centre, so it’s about ensuring we can maximise our returns," he said.

"When I think about the machinery we have I think it’s value for money. We need something that can get the job done, and do it efficiently, and that's what we have found with John Deere."