Crestmead, Queensland (6 September, 2021) — Master Technicians spearheading the adoption of Precision Agriculture, a young woman carving a reputation for excellence and a group of hardworking young mechanical specialists with careers on the rise have been named Australian finalists in the inaugural John Deere Technician Awards.

“There is an enormous pool of talent working in Australia so all these finalists should feel incredibly proud of being named among the best in their field,” Mr Chandler said.

“Technicians deliver services integral to the agriculture, construction and forestry industries, by not only providing vital back-up support and remote diagnostics, but by empowering operators to get the most out of their machinery and technology.

“The role technicians play will only grow in importance as the machinery sector moves through a technological leap that will drive industry growth and efficiency, and we are delighted to be paying tribute to our best and brightest at our first ever John Deere Technician Awards.”

The John Deere Technician Awards were established this year to recognise the hard work and expertise technicians provide to customers across Australia and New Zealand, and their drive to support operators and businesses to be their most efficient, productive and profitable.

These five Australian finalists have progressed to the next phase of judging and are in the running to be named John Deere Technician of the Year. They were selected from a pool of more than 110 nominations received from across the two countries in five different categories. 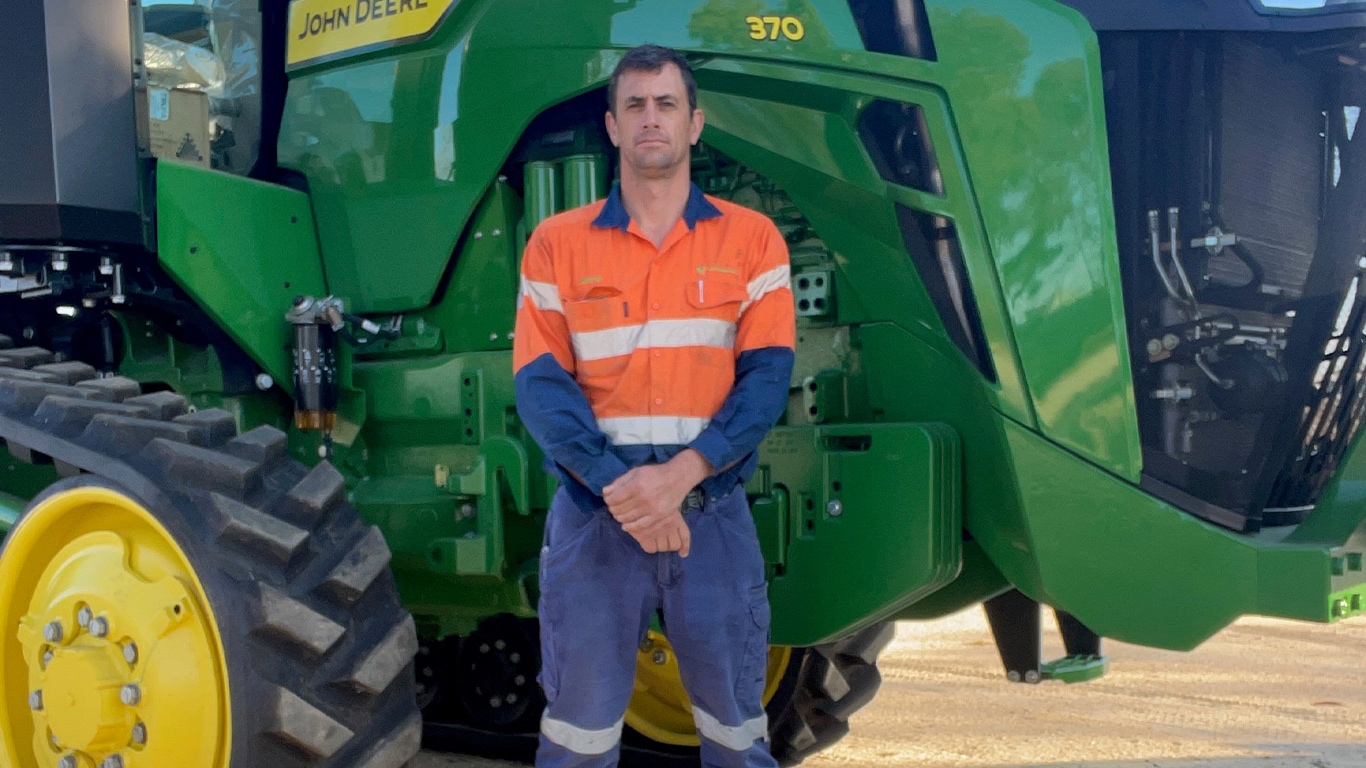 INVERELL father-of-three, Justin Solomon, who has witnessed a remarkable technological transformation in agriculture throughout his 25 years of work as a John Deere technician, is passionate about seeing more young people consider the role as a career.

The Vanderfield Workshop Foreman and Senior Technician, who provides back-up support to cereal cropping farmers in Northern NSW’s ‘Golden Triangle’, a region where he also raises three sons with wife Bec, believes there is a misconception about what the job truly involves.

“A large portion of my role is advanced diagnostics and working with technology that allows me to resolve issues occurring in machines on farms remotely from the dealership.

“For anyone interested in mechanics, agriculture is the place to be as it is at the leading edge of technological advancements. For instance, agriculture had automated steering well before the automotive industry began to adopt it.”

Justin started his apprenticeship at his local dealership, then known as McBean & Son, in 1996 when he was a teenager and became qualified around the same time John Deere’s Ag Management Solutions (AMS) came to market, creating a major change for the farming sector.

“There was push back at first, but with time farmers could see the vast benefits of AMS products and just how much it was needed to increase productivity and profit,” he said.

“Not only have I watched the industry evolve over the last 25 years, I have also witnessed farming operations advance too. I have seen the next generation of farmers come of age, and this generation is even faster at adopting new technology.”

WHEN a firestorm raged through farmland near Keith, John Deere technician, Damian Voss, was swift to lend his well-honed skills to farmers in need.

At the time of the fires in 2018, Damian went to the aid of a farmer whose property was badly damaged and needed to get his tractor up and running to feed out grain to his surviving sheep.

“I worked through the night to get him going again,” Damian said.

“I was more than happy to drop everything to help him out. A big part of it for me was wanting to take the stress off the farmer.”

Although Damian’s job was technically finished when the machine was repaired, he continued to return to the property to help, and tallied up 70 hours of work helping grade burnt-out fence lines with his own equipment.

Today, the 30-year-old is based at Naracoorte’s Wickham Flower dealership, where he is again showing his dedication and loyalty to the farming community.

A dual tradesman qualified as both a diesel mechanic and auto electrician, and with years of experience under his belt, Damian could easily find work in any industry, but said he’s found his ideal job in agriculture.

“I have worked in other industries, and you are often fixing the same machine day in and day out. But in ag, there is a variety of equipment and the job is different every day,” he said.

GROWING up in Dalby, arguably the hub of Queensland’s rich Darling Downs agriculture sector, 25-year-old Henry Finlay’s technician career began with work experience at his local John Deere dealership, Vanderfield, and soon evolved to take him across Australia and overseas in his work to keep customers up and running.

In his first decade providing vital back-up support to farmers, Henry has ventured to the Wheatbelt of Western Australia and abroad to Bougainville Island in Papua New Guinea (PNG).

The trip to PNG was a career highlight for Henry, where he witnessed firsthand the impact productive machinery can have on a community after rebuilding the transmission of a John Deere 8530 tractor.

“When I was in Papua New Guinea the 8530 had a road mulcher implement on the back of it, and they were using it to upgrade a dirt track to a sealed-bitumen road. The locals were very happy to see me, and even happier to see their tractor up and running again,” Henry said.

Back home on the Darling Downs, Henry said another rewarding aspect of his job was helping farmers capitalise on peak windows of production opportunity.

Recently, he went above and beyond to help a cotton farmer repair a harvester under the time pressure of an impending heavy rainfall forecast.

Working outside his hours on the weekend, and in between running on for his local rugby team the Dalby Wheatmen, Henry managed to fix the issue with the help of an apprentice on a Sunday.

“The farmer was so grateful he stopped by a few days later to say thank you and dropped off a carton of beer for the team. It was a big weekend to get him up and running, but a great experience for me to see his crop harvested before the rain fell,” he said.

EMMETTS Roseworthy John Deere Technician, Jaymee Ireland, is on a personal mission to inspire more young women to grasp the opportunity to complete a mechanical apprenticeship within the agriculture industry.

Fully-qualified and carving her own career in South Australia’s rich broadacre and vineyard industries, the 21-year-old specialises in header repairs and said she finds enormous reward in her work, and the integral role it plays in food and fibre production.

“Whenever there is a school expo around here I am sent along to talk to the kids about my job and am always trying to grab the girls’ attention to bring them over to our stand,” Jaymee said.

“It does surprise me there aren’t more young women becoming involved, but I am sure it’s only a matter of time. I think there are times when farmers are surprised a woman is fixing their equipment, but I have earned their trust, and as harvest is getting closer there are a few growers who have already personally requested I head out to their farm.”

Jaymee’s love of farming, and farm machinery, was instilled in her growing up in the sugar cane country near Mossman in Far North Queensland. She recalls her grandfather, Charlie Brischetto, who was a cane harvester operator, gave her a memorable first taste of John Deere equipment — and she’s been hooked ever since.

“He would take us for little drives and I remember being amazed by the machinery, and I do hope I get the chance to one day work back up that way at some stage,” she said.

A genuine zeal for machinery and a drive to increase his expertise and knowledge inspired 32-year-old Master Technician, Josh Carter, to add a new trade qualification to his resume after almost 15 years working for John Deere dealership Emmetts in the Wimmera region of Victoria.

“This is an industry that never stops evolving, growing and progressing, and I could see the technology integrated into these machines becoming more and more prominent, so I felt it was important to continue to remain engaged, and persist in learning as much as I could,” Josh said.

It was almost a given Josh would eventually become an electrician or mechanic of some sort, given the fascination he had as a child with disassembling things to understand how they work. It is this curiosity, and a hunger for continual learning, that has undoubtedly also driven him throughout his John Deere career, which started in his home town, Rupanyup, and led him to now work at Horsham.

“With Emmetts, and with John Deere especially, there is never going to be a shortage of something to learn. My advice to young people interested in becoming a technician is if you think it’s something you are passionate about, it’s definitely the right choice,” he said.

Servicing Wimmera’s thriving broadacre cropping region, Josh has fostered close bonds with Emmetts’ customers and has watched their farming businesses, and their uptake of technology, evolve over his years with the dealership.

“For example, when I started out, AutoTrac automated guidance systems were just beginning to take off and we were completing a lot of installs of that equipment,” Josh said.

“Today, this is technology that’s integrated into farmers’ day-to-day work, and is now very much relied upon by Australian producers.”

With a personal philosophy to always do the best job he can, Josh is passionate about the next generation of technicians and makes time to work with and coach apprentices and team-mates coming through the ranks.

“These technicians have been outstanding in all aspects of their work and go above and beyond to support the agriculture, construction and forestry industries,” he said.

“We are incredibly proud to have them be a part of our business.”