The Joensuu factory received ISO14001 certification of its environmental management system in 1999. Other John Deere Forestry operations gained the certification in two phases: the Tampere office in 2001 and Finland retail in 2006.

John Deere Forestry Oy is a climate partner with the City of Joensuu and signed a climate commitment on 17.12.2015. The commitment includes the aim for energy efficiency, waste reduction, and increased recycling. Since 2016, all waste generated in the Finnish operations has been utilized as either material or energy.

The Joensuu factory is constantly taking steps to reduce waste volumes, increase recycling, and improve materials efficiency. For example, the number of recycling containers has been increased and packaging has been optimized in partnership with suppliers. Actions to improve energy efficiency are continuous; examples include fleet updates, increasing the heat recovery in ventilation systems, and updating the lighting to LED lights.

Environmental aspects have been taken into consideration also in machine engineering. New digital solutions improve the production efficiency of forest machines, and continuous improvements in product and production quality reduce breakdowns and thus the need for maintenance and spare parts. 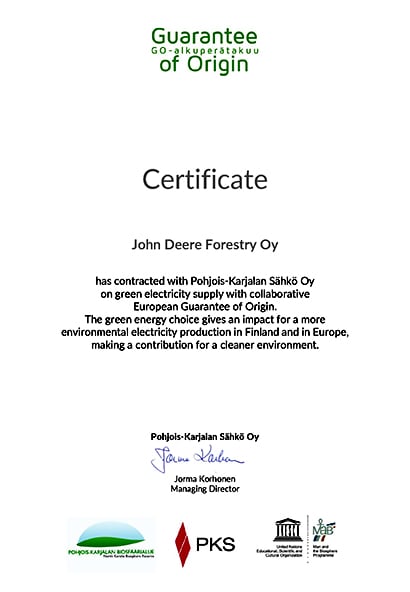 We use GO-labeled electricity produced with hydropower.

With the use of GO-labeled electricity, the company is emissions-free in terms of its own electricity use, and, at the same time, is promoting the uptake of climate-friendly electricity production forms in Finland and Europe.