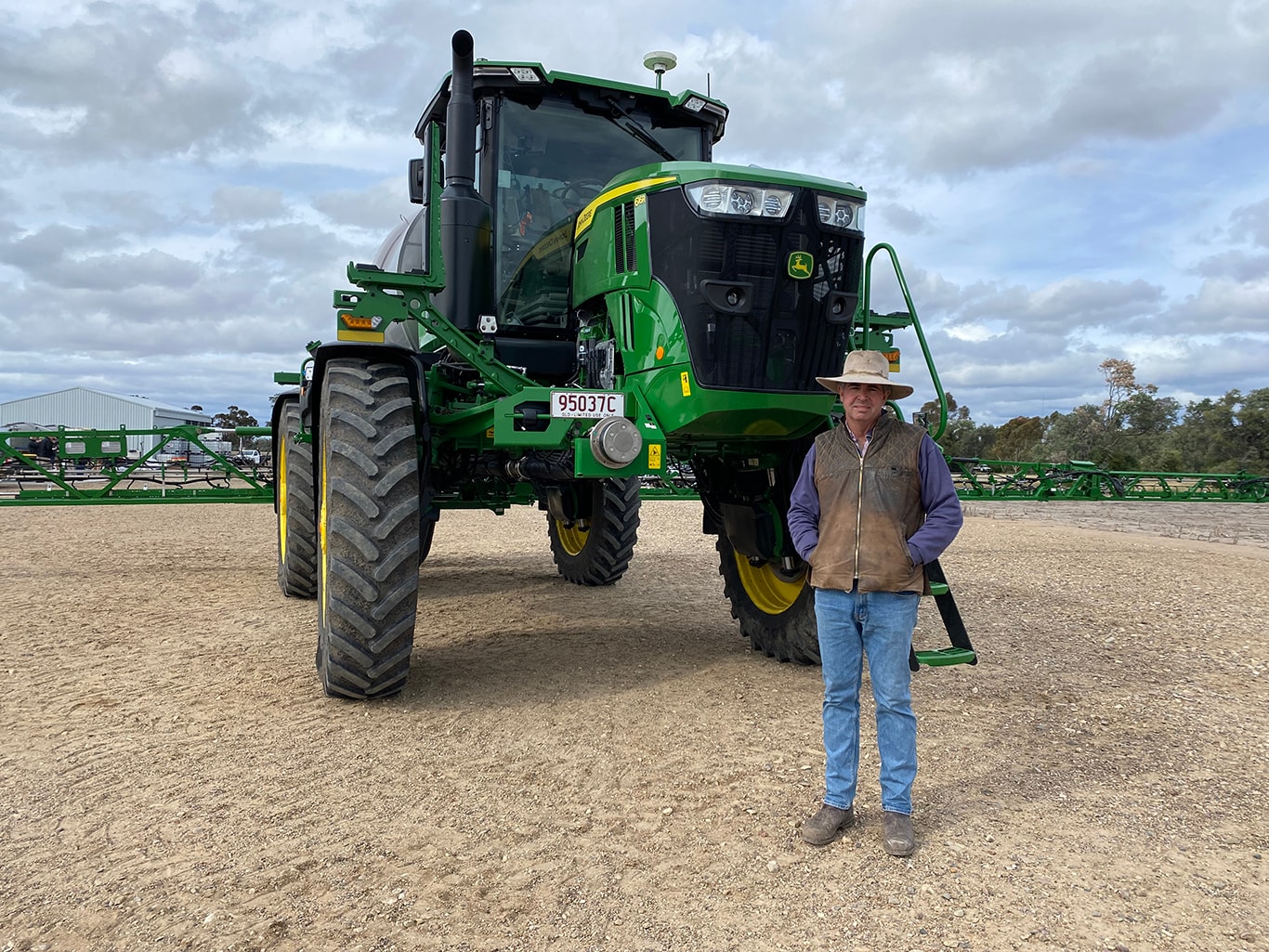 Crestmead, Queensland (6 July 2021) – A trial of John Deere's new See & Spray Select on his property, prior to its Australian launch in March, left north west NSW mixed-enterprise producer, Scott Carrigan, with little doubt this technology would be an industry game-changer.

See & Spray Select brings integrated camera technology that can be installed on a John Deere 400 or 600 Series Sprayer to provide both an effective targeted spot-spray solution and a highly productive broadcast machine. Built on the strong foundation of John Deere's ExactApplyTM, it rapidly detects only green vegetation within fallow ground and triggers an application to those plants. In doing so, it uses an average 77%* less herbicide and provides two time-saving sprayers in one.

For Scott, the saving achieved during the trial was even higher and he could immediately see how it could reduce inputs, save time, be more ecologically friendly and benefit his business bottom line.

"Obviously this was unique to our conditions, but we were running most of the time at around 10 per cent applied, which was a 90 per cent chemical saving - a fantastic result," Scott said.

"You can just imagine the benefit there – there’s less chemical we have to buy, handle and apply to the ground.

"We've been fortunate to have worked with John Deere on this and it certainly has been a game changer for us.

"It's probably the biggest equipment progression we've had in the last two decades."

Rain brings a "jungle" of weeds

Scott farms and grazes at Tyrone near Gurley in the heartland of Australia's cropping industry, known for its excellent soil fertility and diversity of crop production.

Predominantly, he grows wheat for the domestic and export market but also plants barley, chickpeas and sorghum, while running around 4,500 self-replacing merino ewes.

"We've just finished planting and 70 per cent of our winter crop area has gone into wheat, 20 per cent to barley and 10 per cent to chickpeas," Scott said.

The season is "going along quite nicely", after recent rain brought welcome relief from the prolonged drought much of Australia has been experiencing.

But rain is not always without its complications.

Major flooding in mid-March 2021 saw most of Scott's property go under water, posing significant challenges in getting the country back into shape in time for planting the winter crop, including tackling a significant weed burden. However, Scott was able to use the See & Spray Select technology to tackle the heavy weed pressure, while using only a fraction of the herbicide he would typically have applied.

John Deere approached Scott to trial See & Spray Select as part of an extensive due diligence process to ensure the product was finely tuned and ready to meet the needs of Australian farmers.

As a future-focused farmer, Scott is deeply committed to protecting the health of the land he works and said See & Spray Select's ability to strategically place herbicides in direct response to what is in the field was transformational for chemical use and the cost of production. He achieved great success using the technology, not only throughout the heightened weed burden following the flood, but also during the regular Summer treatment period controlling grass weeds, fleabane and other "bits and pieces".

Scott said during the Summer fallow period, he rarely used a broadacre spray, and instead relied exclusively on See & Spray Select to target and treat weeds on fallow ground – something he believes makes it one of the most exciting products on the Australian farm machinery market.

"Certainly, we've found it very exciting to be working with John Deere and it's a product we've been waiting for and wishing for a long time," he said.

"We've finally got something now that works really well."

Backed up by service

Not only is technology integration important to Scott's business, so is the service he receives from his local dealer.

"We deal with Vanderfield Moree, and they are a significant part of our business, given the level of service and back up they provide to us," he said.

"With the connected nature of the machines now, they know about most issues at the same time we do, and they are able to log in so that often things can be fixed remotely."

"We use John Deere equipment because of the level of service and back up given by the team at Vanderfield Moree."

*Based on tank-level sensor values taken at a steady state on John Deere sprayers equipped with and without See & Spray™ Select, before and after covering 75,000 acres of fallow ground with a typical weed pressure of 3,000 weeds per acre, using small and medium spray-length settings starting at 2.3 to 3.2 ft. (0.7 to 1 m), and average growing conditions (seasonal precipitation and temperature) across the US and Canadian Plains and Australian farms. Spray-length settings varied based on ground speed, spray pressure, and boom height. Sprayers were equipped with current hardware and software at time of study. Individual results may vary based on field and growing conditions, weed pressure, spray-length settings, and software version.