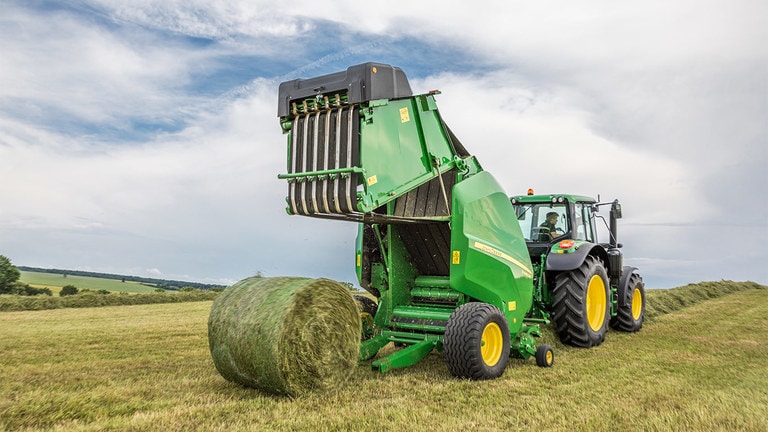 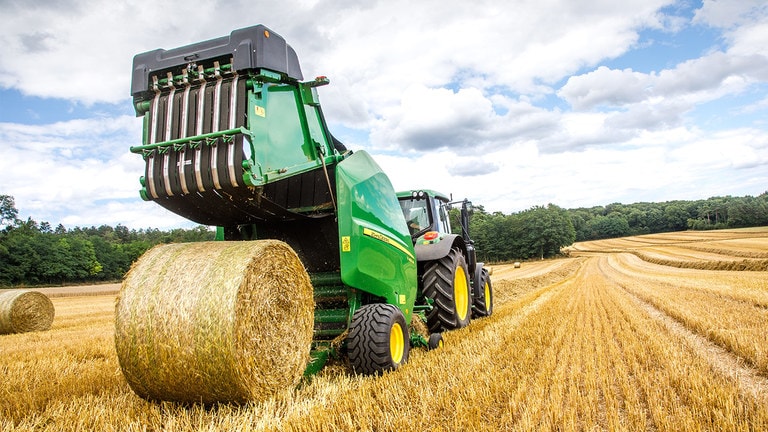 Versatility has been one of the key criteria when designing the M-Series Balers. Due to a narrow weather window and increasing amounts of difficult crops such as heavy silage, growers do not want to risk losing any more time during the season.

Looking at potential component wear, cam-track pickup features an 18 percent lower turning speed than the previous generation of balers, while bearings have been implemented on both side of the tine bars. The cam levers are made of forged steel and cam bearing size increased by 36 percent. All of these points guarantee a very long component life.

M-Series Balers are available with a standard pickup. Two pickup widths are offered:

Both pickups are designed in a similar way, inspired by well-known 900 Series Balers and using the same components as the M-Series Fixed Chamber Balers:

As for other John Deere round balers, the standard pickup does not need any shear-bolt or cam-clutch protection — tines are designed to fold in case of foreign objects or potential overload. The overall system is globally protected by the tines’ bending capacity; tines have been tested through hundreds of hours of bending and grant extended lifespan. The sealed ball bearings on each side offer a quiet ride for a long period of time.

To give good gliding capacity for years, pickup strippers are made from high-quality galvanized steel that prevents the material from rusting.

The standard pickup design meets most medium to large farms’ expectations, especially for growers who bale mainly dry crops or who harvest some silage.

The premium pickup has the same rotation speed as standard pickup, meaning that by featuring an additional tine bar, picking capacity is directly increased by 25 percent. John Deere premium pickup tines are designed to fold to replace potential shear bolt or cam clutch overload safety. Considering 6.0-mm (0.23-in.) diameter tines, pickup maximum intake capacity is pushed up to 18 kW (24 hp), a value not reached by machines using a cam or shear-bolt protected pickup.

To harvest the largest swaths with good operator comfort, the John Deere premium pickup is 2.2-m (7.2-ft) wide, with a 1.92-m (6.3-ft) tine-to-tine distance. The John Deere premium pickup is compatible with the RotoFlow HC Premium rotor (non-cutting device) and MaxiCut™ HC13 Premium (13-knife precutter). Due to the maximized picking capacity, this option is recommended for growers baling a significant volume of wet silage or heavy crops.

By using the HC Premium rotor – a device implemented on John Deere round balers since 2012 – the M-Series feeding system offers:

RotoFlow HC Premium is the perfect solution for non-cutting uses

M-Series Round Balers can be delivered with the RotoFlow HC Premium non-cutting solution. All other John Deere round balers are equipped with a rotor feeder:

On top of the standard specifications, the premium rotor features:

As an alternative to the RotoFlow HC Premium, M-Series Balers can be delivered with the MaxiCut HC 13 Premium rotor. As with the non-cutting system, the rotor features:

MaxiCut HC 13 Premium is available with both standard and premium pickup, no matter the width.

Hardox is a trademark of SSAB Tunnplat AB Limited.

M-Series Balers are delivered standard with a drop-floor unplugging system. In case of a clog, the drop floor is managed from the display simultaneously or independently from the knives. When lowering the floor, the parallel kinematic has 40-mm (1.6-in.) extra free space under the rotor and converging augers.

By providing a constant free space, the John Deere drop floor avoids bottlenecks existing on balers using a movable floor with front or rear hinge. No need to have a huge opening (that sometimes causes crop loss), only a few free centimeters (inches) are enough to remove the plug.

As with the other G-, M-, and R-Series Balers, the V461M Baler features a 1.21-m (3.97-ft) bale chamber width. Compared to previous- generation balers with similar bale diameter, bales are up to 3.6 percent bigger than before. Considering a similar density, that is already a huge advantage.

The V461M bale chamber provides high-density bales regardless of the bale diameter or crop type. A dedicated pair of cylinders apply strength to the density arm while mechanical hooks firmly lock the tailgate in the closed position. Another pair of cylinders manages the tailgate opening/closing and avoids potential interferences between the two functions and tension loss to the belts.

When the baler is equipped with the BaleTrak™ Plus display, the following pressure parameters can be adjusted/controlled from the display:

With the BaleTrak Plus display, bale density is easily set from the baler hydraulic valve by a knob, a simple but efficient solution for growers not changing hydraulic settings several times in a day. Bale density can be controlled from the cab through a hydraulic gauge on the front of the baler.

Softcore density cannot be adjusted, the system removes the full hydraulic pressure into to the density harness.

By providing a loose bale core, softcore function is particularly helpful when baling hay that has residual moisture or when unrolling bale by hand.

The belts are all joined thanks to proven and durable MATO® type lacers. In case of troubles, belts can be easily removed and repaired, something not possible with an endless belt design.

Due to initial empty bale chamber geometry, V461M Balers feature a star-shaped core comparable to the one offered by fixed-chamber balers. This starred shape guarantees easy bale unrolling, regardless of density settings.

The second belt-driving roll is an option with the RotoFlow HC Premium feeding system, while it is installed standard with the MaxiCut™ HC 13 Premium rotor. Two cleaning rollers are also included in the option and keep the crops from sticking on the belts and causing belt slippage.

A second belt-driving roll is also offered as an attachment through the traditional field kit channel.

The V451M and V461M can be delivered with the proven and simple BaleTrak™ Plus monitor.

BaleTrak Plus monitor fits regular use

For operators looking for a simple, efficient, and proven monitor, M-Series Balers can be delivered with the BaleTrak Plus monitor.